The 150th Anniversary of Postcards

This year marks the 150th anniversary of the postcard. Who knew postcards dated back to the 1800s? Interestingly enough, postcards have taken many transformations and undergone many different regulations to get to where they are today.

Postcards have truly evolved over the last 150 years. Postcards have gone through many design phases since the late 1800s. We’ll go over the various changes they’ve made through the years.

Postcards have also transformed in how we use them. In the past postcards were used as a primary form of communication whereas now they are mainly used for souvenir and collection purposes. In fact, the hobby of collecting postcards (deltiology in the USA) is the third most popular collectable hobby in the World! Topped only by coin collecting and stamp collecting. Due to the broad subject matter of postcards, it’s easy to see why. Whatever your interest, it has probably been featured on a postcard at one point.

Postcards are still especially popular among tourists. They make great souvenirs and who doesn’t appreciate getting a postcard with a picturesque beach and the message “wish you were here.” Business’ also make good use of postcards today, they are an easy and inexpensive form of advertising.

Here is a quick timeline of how the postcard has evolved:

While the postcard was first created and issued in Europe in 1870, the first American postcard was developed in 1873. The same year Post Master John Creswell introduced the first pre-stamped “Postal Cards”, which were often called “penny postcards”.

Initially, the Post Office held a monopoly on being the only one allowed to print postcards, until Congress passed the Private Mailing Card Act in 1898 which allowed private publishers to produce postcards. Although, they still couldn’t call them “postcards” until 1901, instead they were called “Private Mailing Cards” or “souvenir cards”. 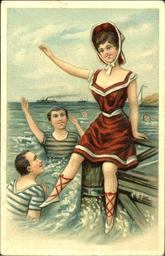 In 1901, private publishers were able to use the term “Post Card”. At this time in the US, the back of the card was undivided. The popularity of postcards grew as millions were being sold, thus creating the “Golden Age” of postcards.

By 1907, having a divided back of the postcard was the common practice. This allowed the left side for the message, and the right side for the address. Unfortunately, at this time, the outbreak of World War I caused a significant drop in the sales and usage of postcards. Thus ending the “Golden Age”.

A growing trend during this time was higher quality printed postcards with a white border around the image. These were commonly called “white Border Cards”.

Current postcards often depict a colored photograph and feature a glossy look due to the paper’s coating. These images cover a wide range of subjects, frequently including: nature scenes, animals, national monuments and landmarks, and city/destination themed images.

Postcards have gone through a great transformation from where they once started out. We hope you found this information interesting, and hopefully useful. So next time you see a postcard while traveling, go ahead and drop someone a line.

The Art History Archive – The History of Postcards

Amanda Fletcher is the Director of Marketing at FP Mailing Solutions. She has been in the mailing industry with FP since 2013. She is passionate about good pizza, running and quality family time.

As the holiday season nears, many consumers will once again turn to online shopping for a majority of their holiday purchases. According to KPMG...

The PRC (Postal Regulatory Commission) has approved the requested changes for postal rates. The biggest change in this rate change is the cost to...

On May 28th, the USPS® filed notice with the PRC (Postal Regulatory Commission) requesting price changes that are planned to take effect on August...